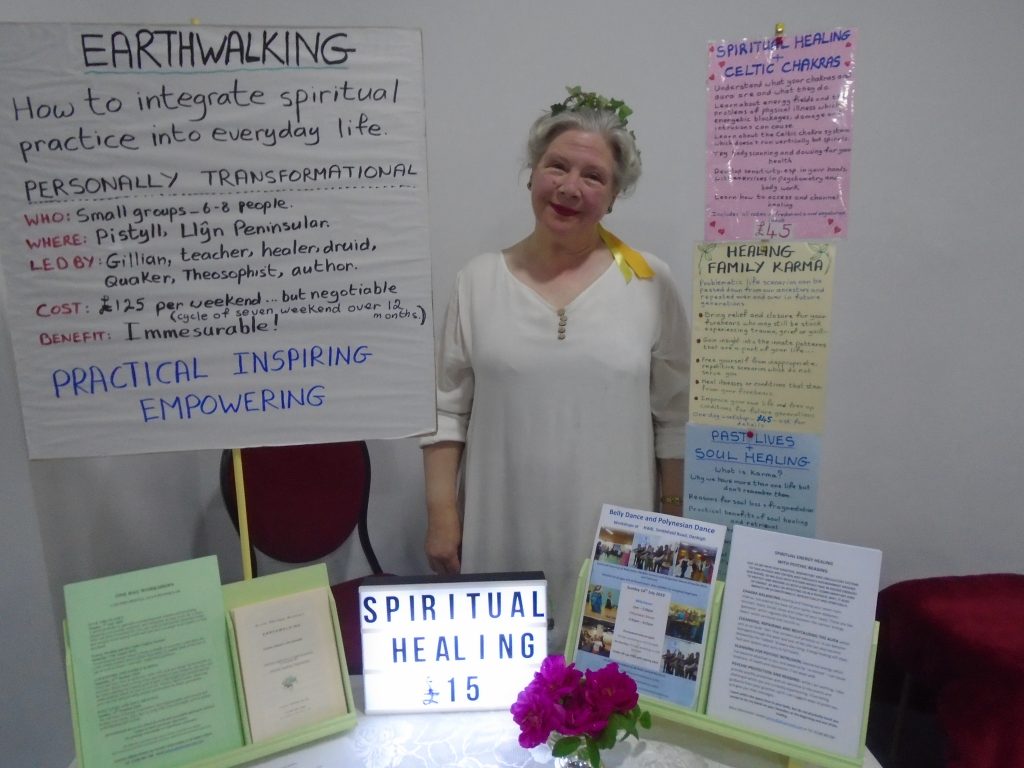 How to spend a gloriously sunny Saturday – among other lovely people who share an interest in healing, thinking and different spirituality, of course! This picture was taken of me yesterday at the Mind, Body and Spirit Fair at Venue Cymru in Llandudno. You can even read some of the details of the various workshops which I am offering this summer and autumn! Had a great day and met some marvellous people. Next one is on the 3rd August, if anyone would like to mark it in their diary and come along for a chat and explore the various possibilities of such alternative ways of thinking, healing and living. 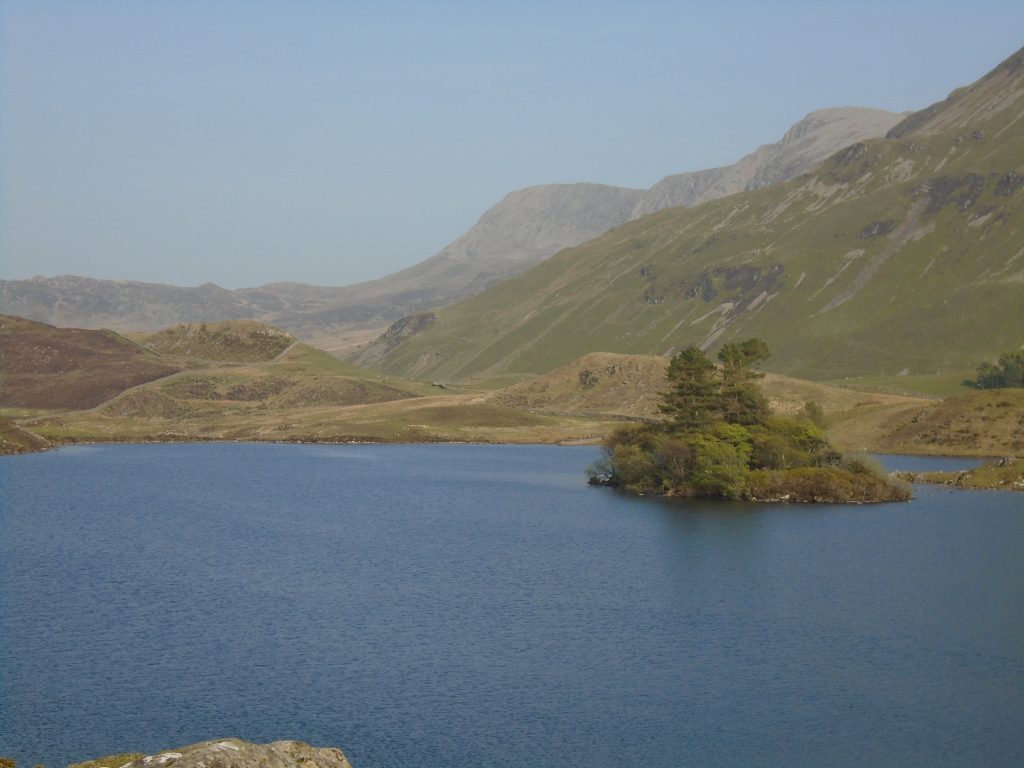 Here we are! Despite the peculiarities of the weather (being hot too soon and cold when it shouldn’t and too dry or too wet at inconvenient times) and all the worries and deep concerns about the state of our planet, we have come through the winter into spring and then into summer.

Here we are at the Summer Solstice – the day of longest light when dusk only comes just before eleven o’clock in the evening and  the nights are hardly truly dark at all. This day is the culmination of the past six months of struggle from the cold and dark into the lush green fecundity of a burgeoning natural world. It seems to have been quite a long hard slog.

END_OF_DOCUMENT_TOKEN_TO_BE_REPLACED 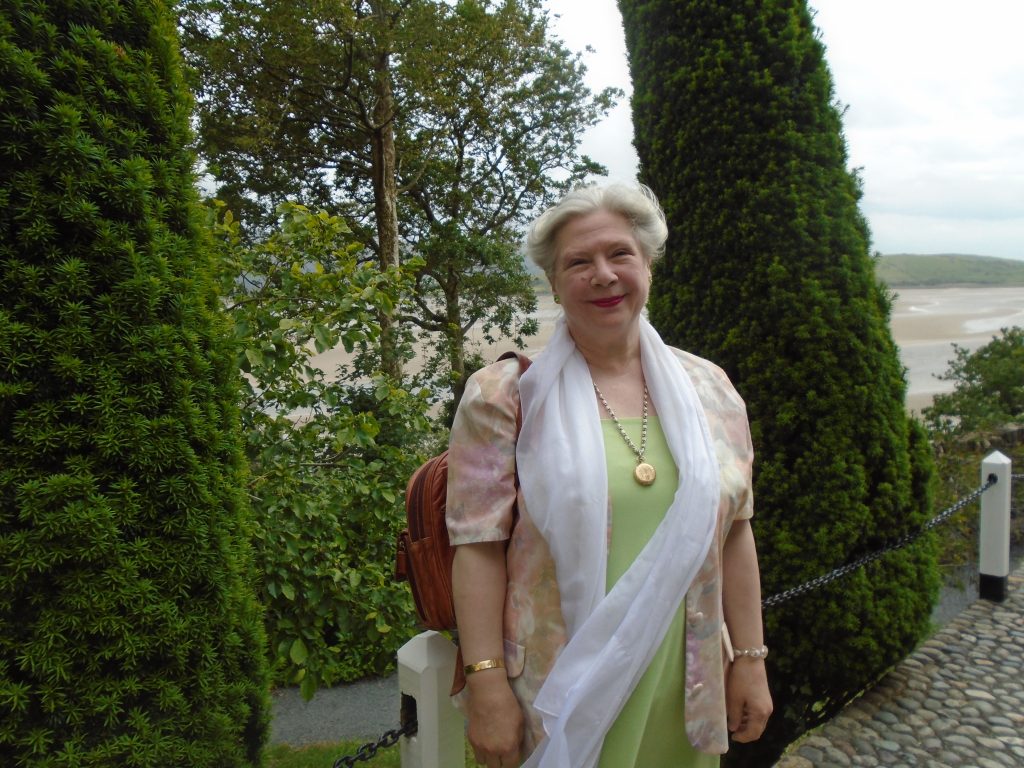 On my way down into the village

Summer is here… or so it has been rumoured. I am not too sure about it myself! But what better time to indulge in an cream tea with my dear husband in celebration of Father’s Day – even though our adult ‘child’ was teaching all day and couldn’t join us.

We chose Portmeirion, home of the world renowned pottery of the same name and where the 1960’s cult T.V. series, ‘The Prisoner’, was filmed. I haven’t visited here for some time and we left home bathed in warm sunshine and sporting sunglasses and walking shoes with every intention of exploring some of the 70 acres of gardens and woodland before arriving at the hotel for tea.

Unfortunately this is Britain, and as all us U.K. residents know, the last thing that can be relied upon is

END_OF_DOCUMENT_TOKEN_TO_BE_REPLACED 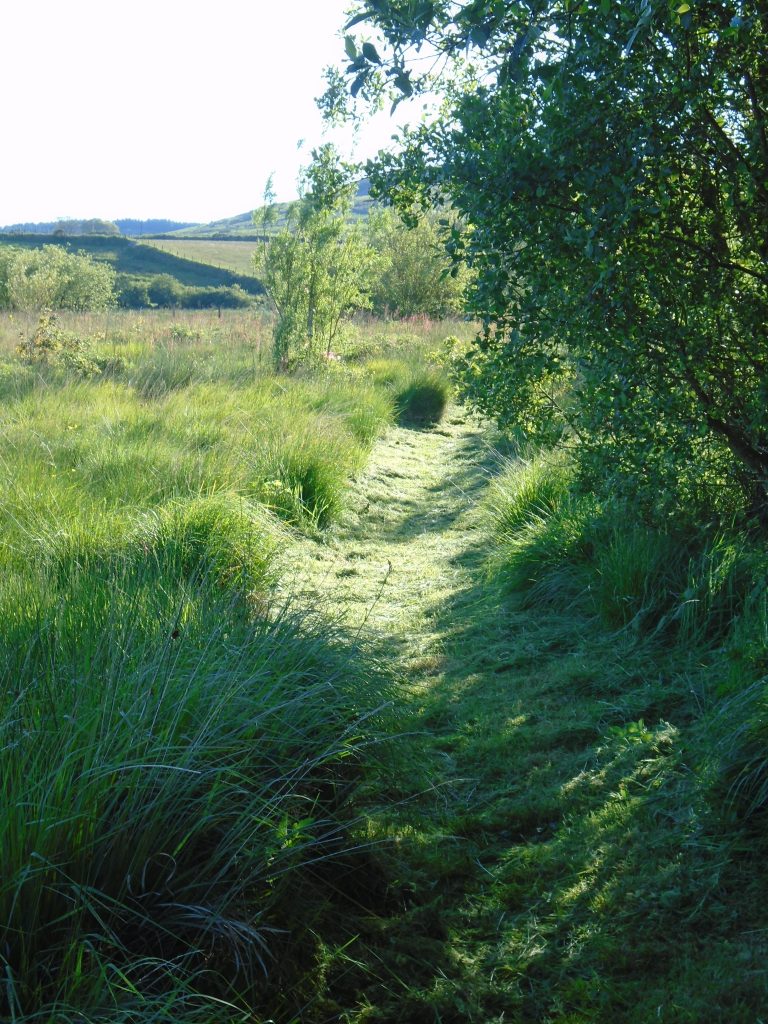 First draft finished – another manuscript now ready to enter the editing and production process! And yes, it is another book centred around Midwinter and Christmas but is applicable to any time of the year. ‘The Alternative Advent Calendar’ is based on the traditional twenty-four doors, with an extra special door to open of the twenty-fifth of December.

Advent calendars are usually based on giving us something nice to enjoy. This calendar differs in that – far from taking – it is all about what we can give back to the world around us. There is an introductory chapter to explain the origins, aims and development of the advent calendar and also an explanation of the ethos behind Advent itself. This is followed by twenty-five short chapters, each one suggesting a way in which you can make life pleasanter and happier for everything that lives around us – and here I am including animals, plant life and inanimate objects as well as the human element.

Each door will be marked by a large, seasonally illustrated numeral which the reader will ‘open’ by turning the page. There is a simple task or challenge for every day; ideas like giving a hug to people, making someone a hot drink, spending quality time with someone, making people laugh, feeding the local birds, planting seeds, and so on. I also include why these things are important… what real benefit they bring to those around us. Yes, we are mostly aware that it is good to promote such actions… but then we often forget to keep on doing them, especially in the hustle and bustle of the weeks before Christmas when in reality this is just the exact time we should be focusing even more on selfless thought and activities – not less.

But nothing we do, think or say is without its consequences and nothing we participate in is simply one way – there are ultimately the benefits that accrue to the perpetrator as well. Simple kindness can bring immeasurable fulfilment, satisfaction, joy and love. Our interactions with others are always a two-way street.

So, if you want to give yourself or your loved ones an early Christmas present look out for ‘The Alternative Advent Calendar’ which will be available to buy from the beginning of October onward. There is also a final short chapter on how the ideas can be applied to any time of the year – January is a wonderful time to instigate these activities… brighten the cold dark world of post Christmas and cheer everyone (including yourself) by doing so.

This whole idea began as a series of blog posts dashed off in the heat of the moment last December while I was rushing around promoting my first book, ‘Merry Midwinter’. Once Advent had come to a end it seemed such a shame to merely discard the idea, so earlier in the spring I began work on rewriting them and taking the time to truly consider what I wished to convey. The result will soon be in the hands of my editor.

I have also been having long conversations about how I wish to portray the seasonal numerals which will represent the ‘doors’. I finally knocked up some very rough sketches to show everyone what I had in mind. They were warmly received and now – although I am no artist at all – am left with the task of doing the job properly for inclusion in the book. I just hope that it does not also fall to me to execute the cover… words are one thing but lines on paper have a habit of refusing to do what I expect. Come to think of it, so do my words! Ah well, such is life – jolly exciting isn’t it?